Alfama – the Soul of Lisbon 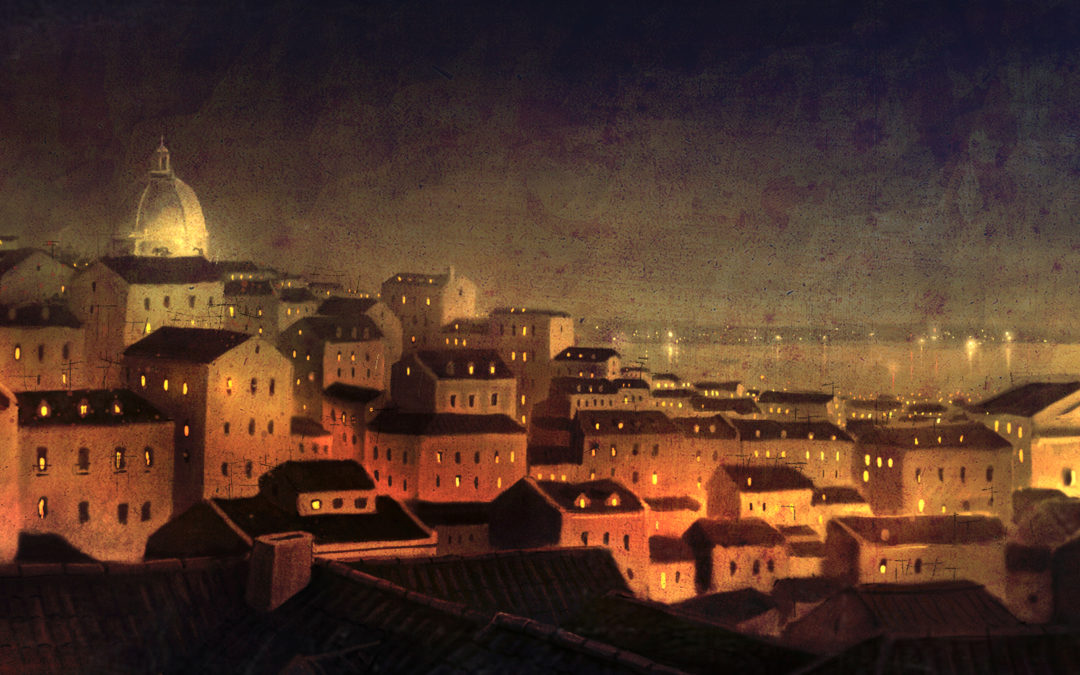 The Alfama is the oldest neighbourhood and the cultural heart of Lisbon. This colourful sloping labyrinth of cobble stoned lane ways between São Jorge Castle and the Tagus River was one of the few areas of Lisbon to survive the 1755 earthquake that destroyed much of the city. The Alfama has, for the most part, retained its character and medieval charm, although there is a danger that over-tourism might damage the local and unique attributes that made it an attraction in the first place.

The beginnings of the Alfama

The name Alfama comes from the Arabic word Al-hamma, which means ‘baths’ or ‘hot fountains’ and refers to the many hot springs and fountains in the area. The Alfama has changed hands many times over the years, being inhabited first by the Phoenicians 1000 years BC, and then by the Romans, Visigoths and the Moors. The Moors can be credited for the web-like layout of the streets that they built as both a defence system and to keep their homes cool in the summer.

The Alfama was historically a poor area outside the city centre, but as the city expanded, it became the neighbourhood of the working class and specifically, fisherman. This is how Fado music came to be born here — through the wives and families of fisherman lamenting the loss of loved ones at sea in their haunting songs. 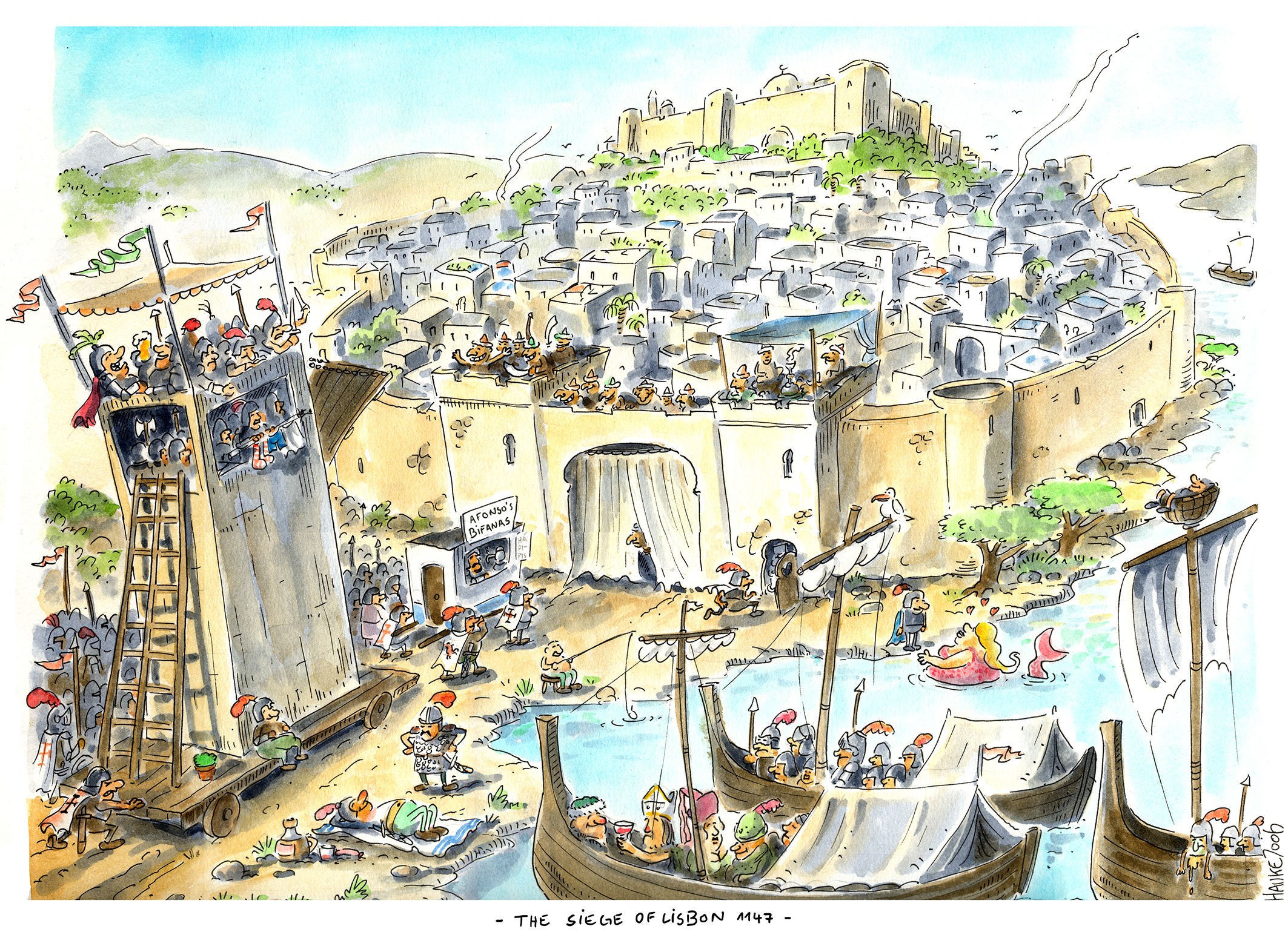 There was a period during the 1980s when the Alfama was a dangerous and troublesome neighbourhood, but it has been renovated and rejuvenated in recent years and has now become a bit of a tourist hot spot. So much so that it has experienced what some call terramotourism – a tourist earthquake. Short-term holiday rentals began to push out locals who could not afford the surging rent prices and there was a real danger that the neighbourhood would lose its heart and soul. In the wake of COVID-19, however, the government has instituted a new policy that will reverse some of the damage done. Over 20,000 tourist apartments will be converted into government-subsidized affordable housing for locals. This will hopefully preserve the Alfama for its residents and visitors to enjoy. 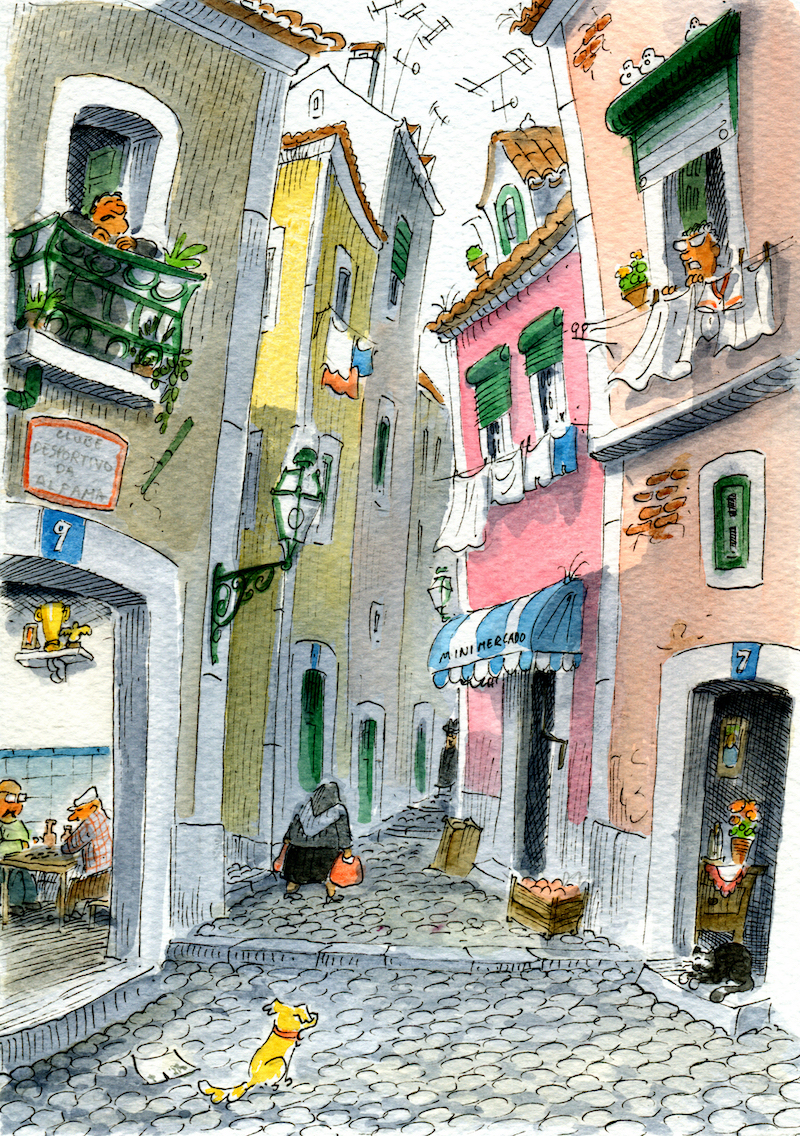 In your mind’s eye, imagine a cluster of colourful terraced houses tiled with chipped but beautiful azulejos (glazed ceramic tiles) and framed with wrought-iron balconies, narrow twisting lanes with churches and squares hidden amongst the maize, children and dogs and cats playing in the streets, grandmothers gossiping across the washing lines and the famous tram, the ‘elétrico 28’, rattling down the avenue. Fado music is playing out of open windows framed with wooden shutters and caged birds are squawking from their perches. 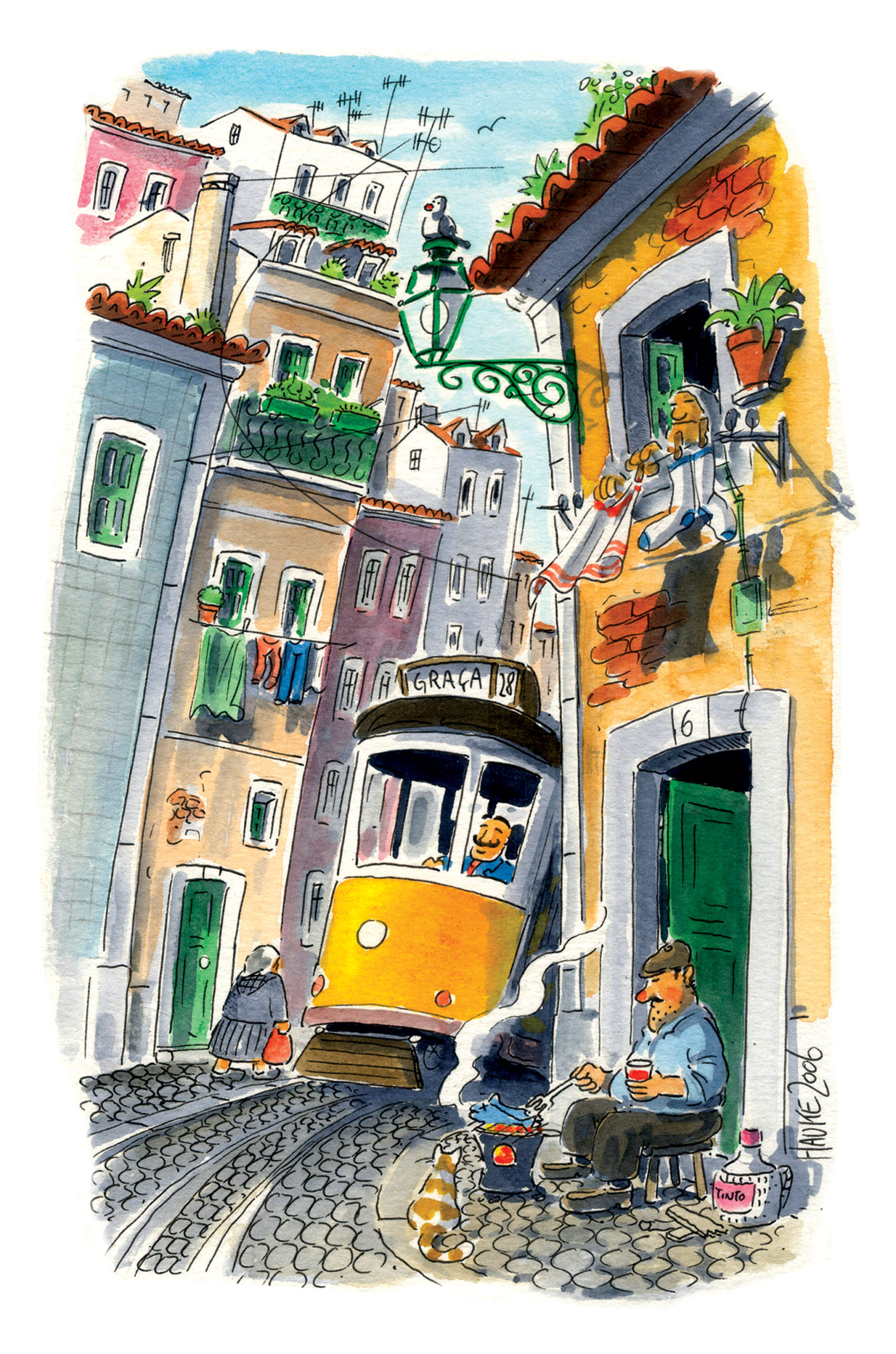 If you don’t have that good an imagination, you can get an artist’s impression of everyday life on the streets of Lisbon. Hauke Vagt is a German-born artist who has lived in the area for 25 years.  His illustration of the Alfama’s tram #28 was used for the label of Vidigal Wine’s Porta 6 wine and has become well-renowned. Head over to Atelier49’s gallery to see posters and postcards you can order online that capture the unique atmosphere of the Alfama, as well as Portuguese culture and the rest of Lisbon, in interesting and original artwork. 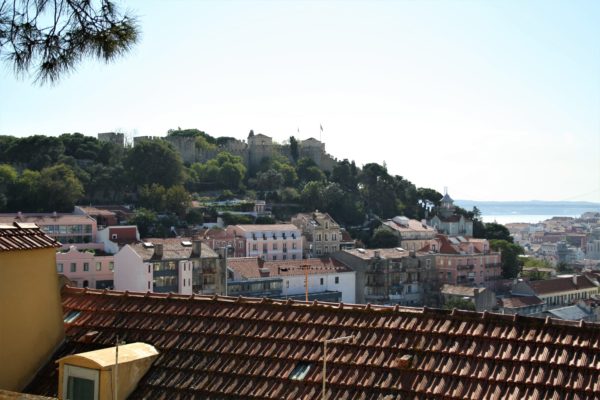 Towering over Lisbon, the Castle of São Jorge was home to the royals until the early 1500s. Wander along its walls to get an insight into Lisbon’s history and view grand vistas of the city and its bay. 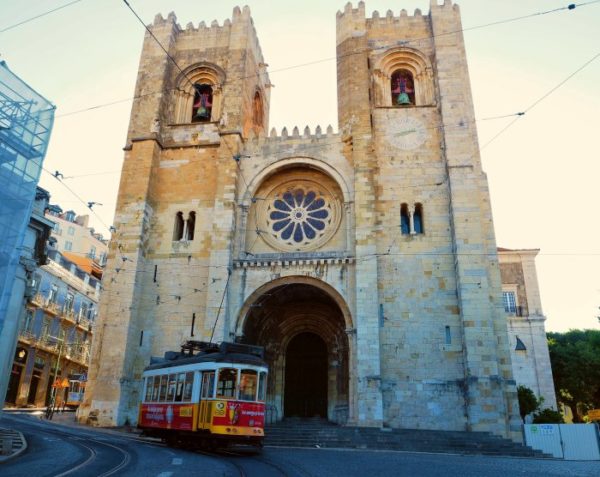 Sé Cathedral, also known as Lisbon Cathedral, has a mysterious history. Some believe it was built on a Roman temple and other records indicate it was built on the remains of a Moorish mosque. Portugal’s favourite saint, Saint Anthony, the patron saint of the illiterate and the poor, was baptized here. 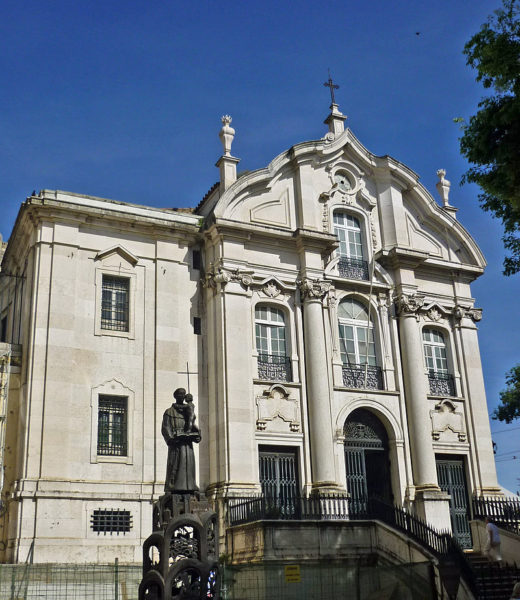 Speaking of Saint Anthony, the Igreja de Santo Antonio (Church of Saint Anthony) is also in the Alfama and was constructed on the spot where he was born. Outside the cathedral is a statue of the saint and a fun tradition is to try to throw a coin onto the book he holds in his hands. If you succeed, you will find a new or improved partner!

The Igreja de Santo Antonio is part of the Museum of Lisbon, along with Casa dos Bicos (translated to ‘House of Spikes’), a historical house with a façade of 1000 diamond-shaped spikes, the Teatro Romano (Roman Theatre), Palácio Pimenta, and Torreão Poente.

There are a few lookout terraces (miradouros) in the Alfama which offer lovely views of the city. The Miradouro de Santa Luzia offers you a beautiful sunset view and also gives you the opportunity to admire the azulejos or decorative tiles that line its walls. The Miradouro da Graça offers panoramas of São Jorge Castle, the River Tagus and the 25th of April Bridge (Ponte 25 de Abril). 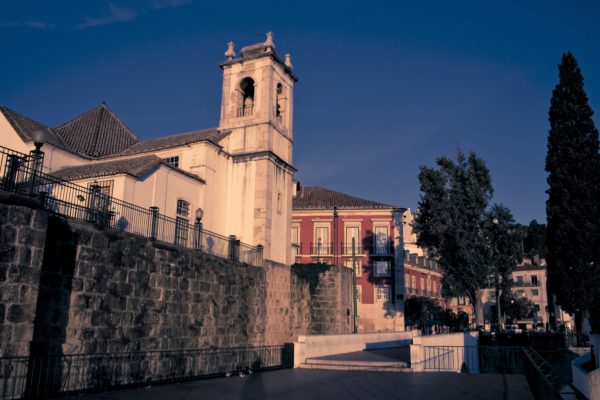 Every Tuesday and Saturday from sunrise onward, the Feira da Ladra or ‘Thieves Market’ at Campo de Santa Clara is in full swing. It is open until the vendors feel like they’ve sold enough or just want to go home, so get there early to get all sorts of collectables and interesting finds. 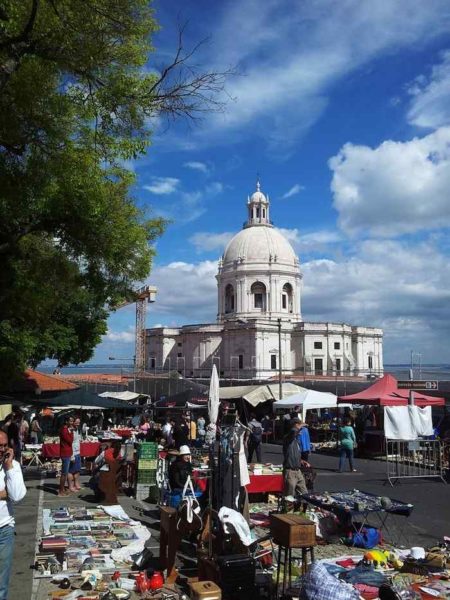 The National Pantheon, built on the site of the church of Santa Engrácia, took 300 years to build and houses the tombs of many of Portugal’s royals and celebrities. It also offers beautiful vistas over Lisbon.

As the Alfama is the home of Fado, there is a dedicated Fado Museum, which exhibits over 14,000 Fado-related items.

How to get around

The best way to get around the Alfama is on foot. Many of the narrow alleys and lane-ways don’t permit or are too small for cars. To get to the Alfama, take the Blue Line (Linha Azul) to Santa Apolónia Station. Bus #37 and trams #12 and #28 also travel through the area. 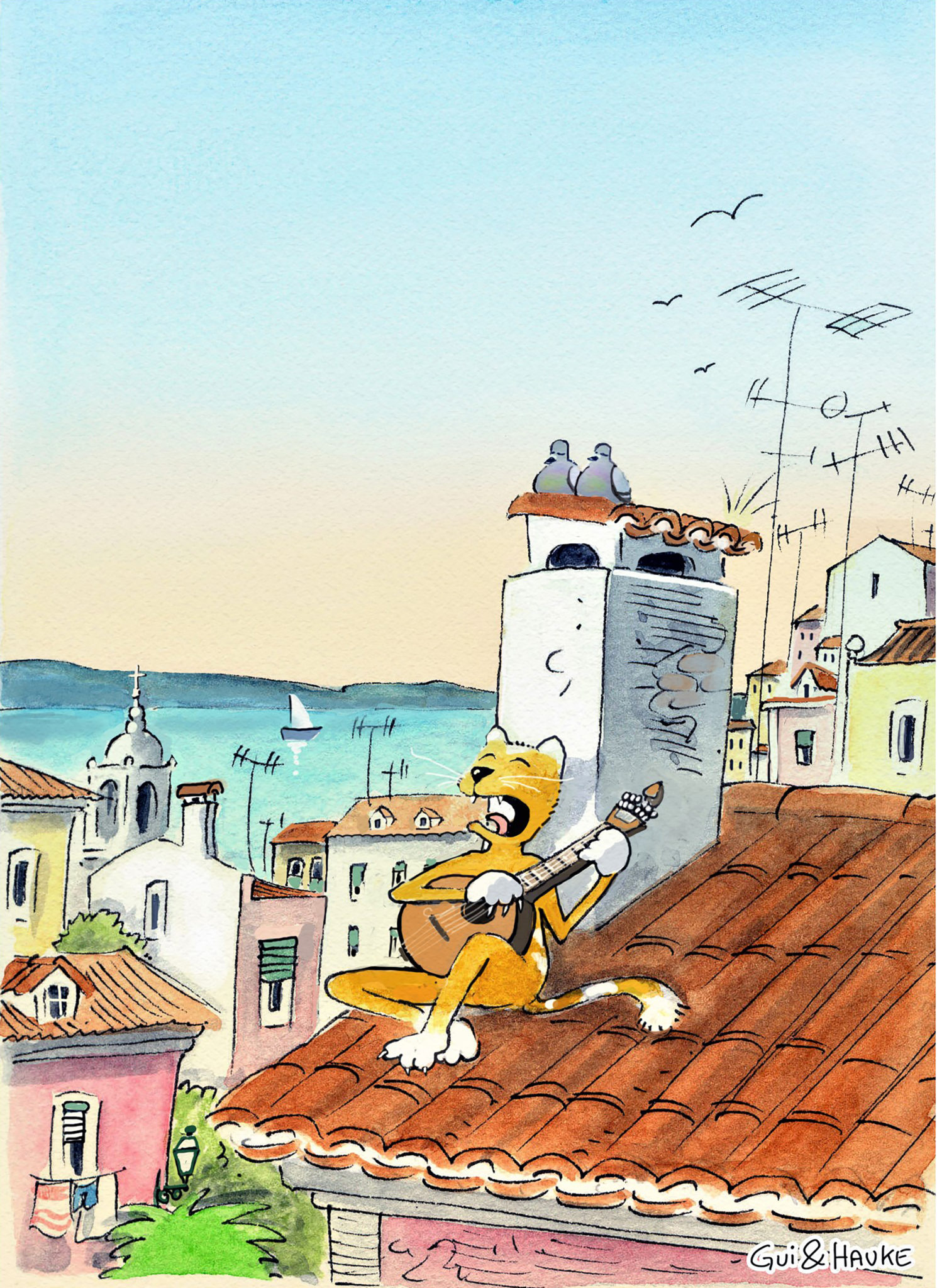 The Alfama offers you the opportunity to step back in time and view a slice of Lisbon as it used to be. As with many authentic cultural experiences, it needs to be protected and respected to be preserved. When you visit, we recommend taking time to interact with the friendly Lisbon locals who have lived there for decades and really immerse yourself in the spirit of the Alfama.