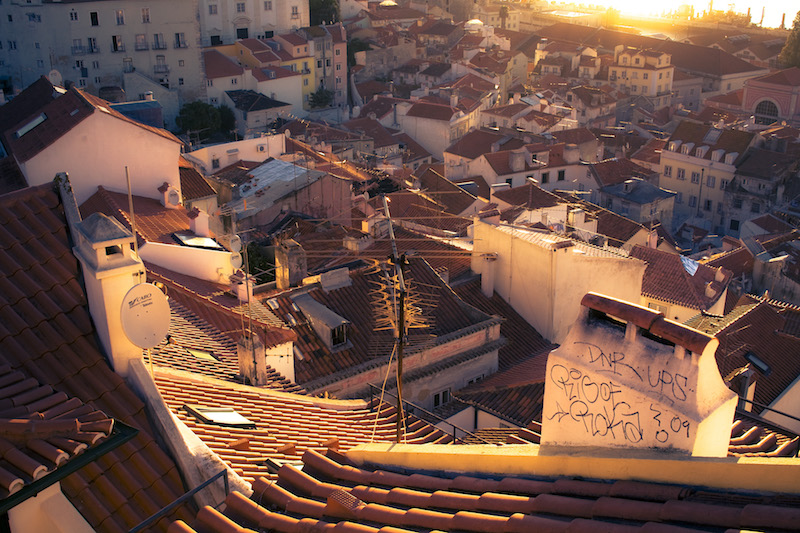 With spring in bloom and sun shining there is absolutely no doubt Lisbon is climbing the list of World’s Best Cities. If it wasn’t already considered cool, events like Web Summit or Eurovision have attracted more people to the city’s undeniable charm, great atmosphere, awesome food and buzzing nightlife. And should we mention the good value compared to its European neighbors? What a steal!

One of the world’s oldest cities and the sunniest of Europe, you can feel its antiquity every corner you turn. So if you are history-hungry you can’t miss Alfama district!
It was almost destroyed by an earthquake in 1755 but was rebuilt and revived, turning the neighborhood into a mix of old and new. Fascinating narrow streets with intricately patterned cobblestones lie beneath your feet. Old buildings decorated with beautiful painted ceramic tiles – Portuguese Azulejos. The smell of clothes slowly dried by sun decorate the streets. Little old ladies watching passerby’s as they great each other from their windows.

You can hop on century-old wooden trams and iron funiculars that ride up and down the hills of the city to get a better feel of Lisbon’s nostalgic character. But you will surely take so much more in if you’re ok with burning some calories walking. Being built across seven hills means almost every street has satisfying views over the city as it crumbles down towards the river. The view from Castelo de São Jorge, reached by an escalade up a labyrinth of ancient streets is truly breathtaking. The “miradouros” of Portas do Sol or Santa Luzia are also some of the best views you won’t want to miss!
Alfama is known for its restaurants, Fado bars and Lisbon’s craziest night: June 12, Eve of Saint Anthony, matchmaker, protector of young brides and patron of the lost and found. Hands down it’ll be a night to remember, or not!!! Street parties “flooding” with sangria & grilled sardines take over the historic center. This district knows how to have fun!

Throughout practically the whole month of June, you’ll be able to experience the “Festas dos Santos Populares” (Feast Days of the Popular Saints), effervescent festivities that take over the city’s nightlife. Eating, drinking and dancing together in the streets along with parades and lots of basil with love poems. You can’t go wrong! 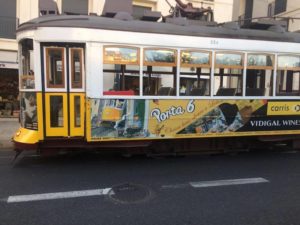 But if you are just looking to have any enjoyable well-rested vacation then perhaps you are better off slipping inside a steamy restaurant or bar and listen to Portugal’s UNESCO inscribed music: the soulful Fado music.
With a population of fisherman and sailors back in the day, it became the soundtrack of Alfama and the entire country. Mournful tunes and poems portray the life of the poor, tempestuous relationships, lost men at sea or broken hearts Fado (literally: “fate” or “destiny”) is Lisbon’s version of the blues, highlighted by vocals full of heartache accompanied by a Portuguese 12-string guitar. It screams identity, culture, and history. And even if you don’t understand a word, it’s so intense you’re sure to feel it!

Nowadays there are over 40 fado houses scattered throughout the maze that is Lisbon’s blueprint. Although still very traditional, evoking the Portuguese emotion of “Saudade” (a deep emotional state of nostalgic or profound melancholic longing for an absent something or someone that one loves and may never recover or return), the ballads have updated themselves and hundreds of fadista singers perform every night in Alfama,
Some more touristic, others more typical, you can experience sobbing powerful voices at two types of fado clubs. You can find the Pros at what is called “adega típicas” which typically require a reservation as they are usually full dinner and show experiences. Keep in mind: when you party late like the Portuguese dinner starts the earliest at 8 pm, followed by a show at least an hour later. If you don’t want to wine and dine “amateur tascas” are the way to go. They are a lot more casual than adegas and you won’t really need to worry about a dress code.

Still, you must keep in mind that but both have unwritten policies that guests should respect. Golden rule: remain completely silent during the performances. If you’re at an adega, this means fork, knife or any other utensils down. At a tasca, you shouldn’t order a drink or enter until the singer has finished. You should be fine to snap a selfie of two but NO flash. Good or bad, you’ll feel moved. Being such an important heritage, you truly can’t miss out on the experience!!! 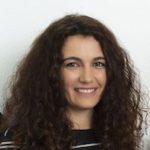