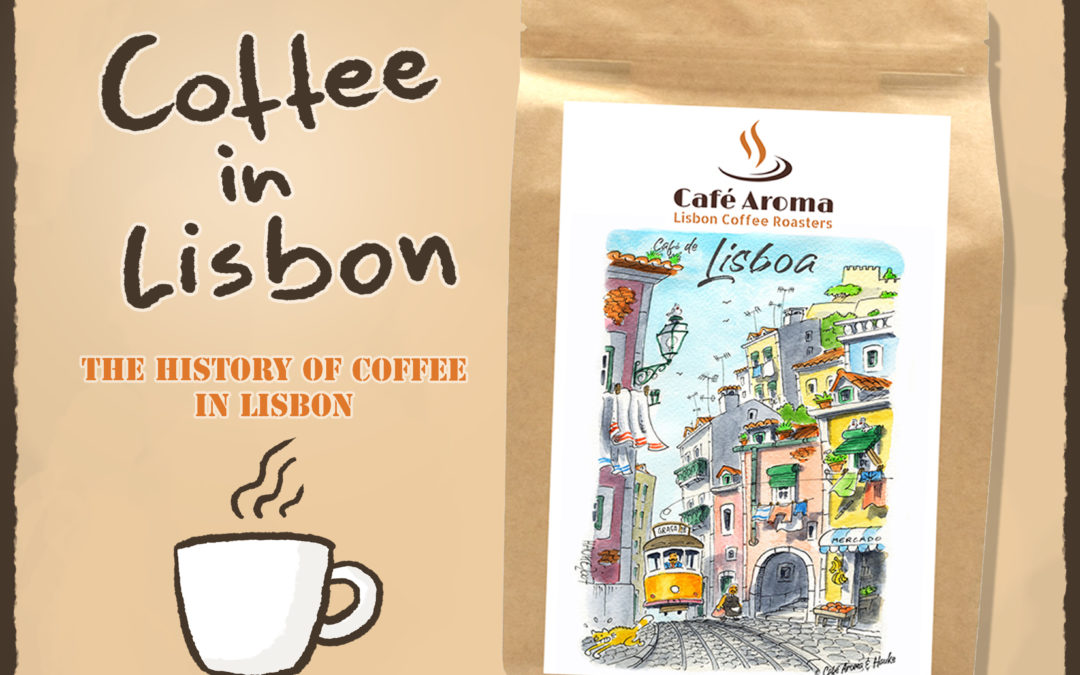 Drinking coffee in Portugal is an everyday part of life, with cafés found almost around every corner, and espresso and its variants being the most common drinks. You can order an abatanado, a galão, a meia-de-leite or even a mazagran! But that is a topic of its own and offers enough excitement and material for a blog-entry of its own! Drinking a coffee in Portugal is significantly cheaper to drink out of home, than it is in most of the other countries in the EU. An espresso (in Portuguese it’s an expresso!) normally costs between 60 and 80 cents in the bar. 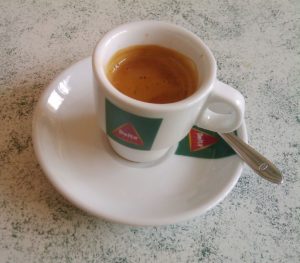 Coffee culture in Portugal is not only a part of everyday life, but has a long tradition. The history of coffee in Portugal begins already in the 18th century, when it was first introduced to the former colony of Brazil under the Portuguese King João V. From Brazil, coffee then reached the other former Portuguese colonies of São Tomé and Príncipe and Cape Verde. In Angola, coffee was introduced somewhat earlier by Portuguese missionaries, and coffee came to Timor via Java by the Dutch. Because of all these relationships, Portugal was at the very forefront of the then emerging coffee industry. 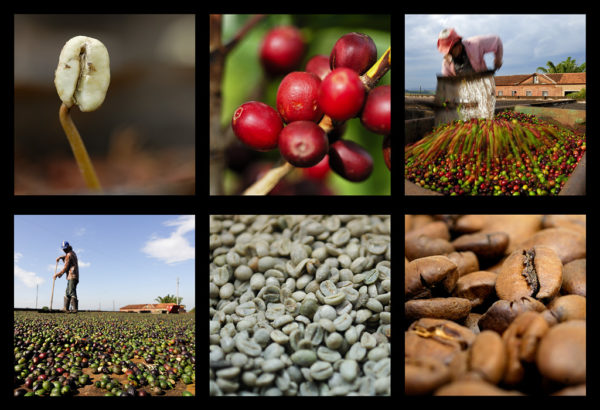 Smuggling to Spain, especially coffee, after the Second World War was a way of life in towns or villages near to the Spanish border, such as Marvão or Miranda do Douro, for example. In Miranda do Douro, this practice is remembered in border villages through initiatives such as the Coffee Route. In Campo Maior was founded Portugal’s largest coffee roaster, the Delta coffee group. 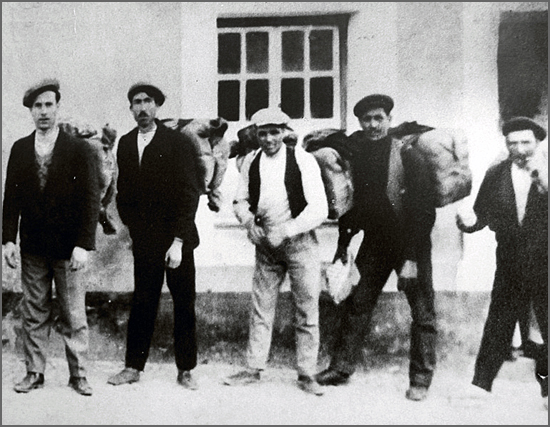 The Torrefacto coffee is a special form of coffee roasting, where a certain amount of sugar(!) is added to the coffee beans during the roasting process. The beans roasted in this way are mixed with conventionally roasted beans, usually with a 20-30% share of torrefacto beans. This way of roasting is of Spanish origin and was invented to make the beans last longer, due to the additional sugar layer. But it has also a long tradition in Portugal and is still appreciated today. This type of roasting can still be found in Spain, France and some Latin American countries (Argentina, Costa Rica, Mexico, Paraguay and Uruguay). 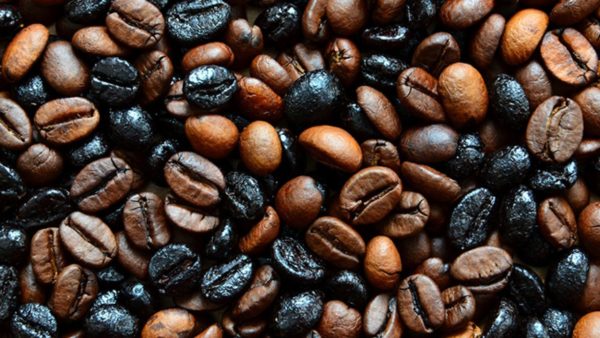 Coffee in Lisbon and Porto

The 18th century also saw the emergence of the first public cafés in Lisbon, inspired by the 17th century French tertulias (a kind of literary salon), which became places for cultural and artistic activity. Among others, the Martinho da Arcada was inaugurated in 1782 by the Marquis of Pombal, the Café Tavares opened in 1784, both of which still exist today, or the Botequim Parras. The Café Nicola in Lisbon opened in the late 18th century, and moved to its current location in 1929. At the beginning of the 19th century, the famous Marrare Cafés opened, founded by António Marrare, an Italian of Sicilian origin, and Botequim in Lisbon was opened in 1968 by the Portuguese writer Natália Correia. 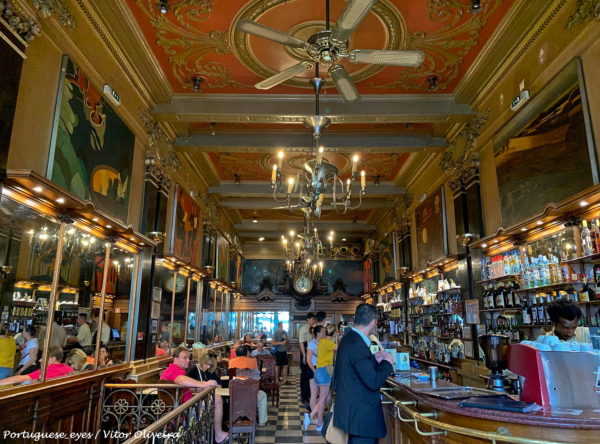 In 1905, the famous café A Brasileira was founded in the centre of Lisbon, in Chiado, by Adriano Telles, a Portuguese married to the daughter of one of the largest coffee producers in the Brazilian region of Minas Gerais. A Brasileira developed into one of the most popular cafés in Lisbon at that time and was the venue for numerous intellectual, artistic and literary gatherings. 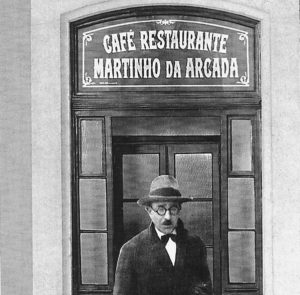 Renowned writers and artists such as Fernando Pessoa (image above) or Almada Negreiros found the inspiration for their ideas here. The café A Brasileira is also said to have originated the name Bica, an acronym for “beba isto com açúcar” (= drink this with sugar). This was an advertising incentive at the time to make the somewhat bitter coffee more palatable to the critical Lisbon clientele. In Porto the Café Guarany (image above) opened in 1933 (and was restored in 1994), and according to the website was known as the musicians coffee shop. In addition to the food and drink, they do hold music events including traditional Fado music. Café Progresso was founded in the early 19th century and the Café Majestic opened its doors in Porto in 1921 and is considered one of the most beautiful cafes in the world. When Italian espresso machines arrived in Portuguese cafés in the mid-20th century, the term cimbalino coined itself in Porto for an espresso, a variation of the Italian brand for professional espresso machines La Cimbali. 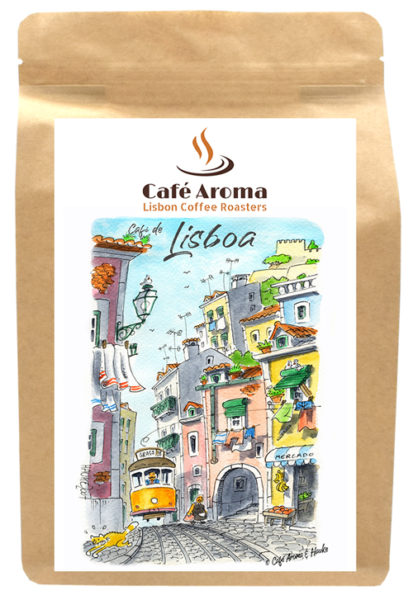 The new coffee roaster Café Aroma – Lisbon Coffee Roasters has developed an espresso-blend with the the label of one of Hauke´s drawings of Lisbon. So people can take a piece of their holiday home!

Some links to use:

Link to the “Coffee page” (English):